This is an inventory of all the German American Heritage Sites  that  highlight America’s German culture and history across the country. From the original settlement of Germantown (Philadelphia) founded in 1683  until today, the Deutschamerikaner has played a huge role in our nation’s history.  A huge belt of German settlement runs across the northern tier of our entire country from the east coast to the west coast.  Within the “German Triangle” created by the cities of Cincinnati, St. Louis and Milwaukee lies the largest amount of  German settlements begun in the Nineteenth century . “With an estimated size of approximately 46 million in 2014, German Americans are the largest of the ancestry groups reported by the US Census Bureau in its American Community Survey.”[1] The group accounts for about  1⁄3 of the total ethnic German population in the world.

The German American Heritage Survey will assemble the past and present influence of the German heritage in the United States. An inventory of sites, prominent people and institutions, settlements, culinary memories, conflicts, scenic byways, migration routes, 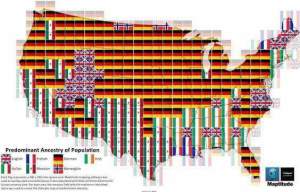 religious influences, agricultural influences, maps, prints, and images, and music, art, and architecture, along with a list of current organizations with whom to collaborate will be gathered.  From this survey, we will use GIS mapping information to share these sites and stories across the country. We will also assemble an interactive website and app, allowing access to our nation’s rich German Heritage.  Project Director, Dorris Keeven-Franke,  has assembled a team who will assist in coordinating this project.

German Americans in the U.S.

With an estimated size of approximately 46 million in 2014, German Americans are the largest of the ancestry groups reported by the US Census Bureau in its American Community Survey.